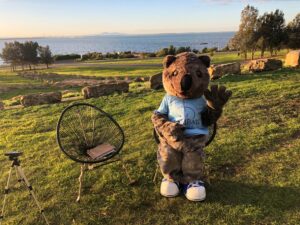 For those of you who have not met me, my name is Freeman.  I joined Wombat’s Wish a few years ago and have had a wonderful time meeting families and making new friends.

Sometimes people ask me about how I got my name.  I decided to ask my creator, Gabe, about my name and here is her story.

Gabe is a seamstress and costume maker by trade.  She made Swish and Stripe, the tiger mascots for the Richmond Football Club, and she made me.  So, I think she is amazing.

Gabe told me that she taught herself to sew when she was about 11 and has been creating things ever since.  She said that was one of the things she did to try to cope after her dad died. but I think I am getting ahead of myself.  First, let me tell you about Gabe’s dad.

His name was Adrian Ernest Freeman.  He is the guy I was named after.  From everything I have heard, he was a wonderful man.

Adrian was funny and silly and loved jokes (especially fart jokes).  Gabe says he was a great dad who was very family oriented.  When Gabe and her brothers and sisters were little, he had a job that made him work late.  She remembers waiting up past her bedtime, and peeking out the window to see his headlights in the driveway when he came in.  When she would see them, she and her brothers and sisters would go bolting out for cuddles.   He would bring treats and make them giggle.  Her mum would be annoyed because she had worked so hard to get everyone in bed, and then they would all be all riled up again.

Gabe’s dad loved dancing to disco music and “whether you were two or four or a hundred, he would put you on the dance floor.”  One of Gabe’s last wonderful memories of her dad is dancing with him on her 10th birthday.  He was “flying everyone around in the air.”  She has a photo from that night that she has shared with us.  It is special for sure!

Adrian had a car accident later that night when he was driving Gabe’s sister to her Auntie’s house for a sleepover.  Adrian’s brain was injured.  He was in the hospital for quite a while and then in a nursing home before he died.  He never regained consciousness.

Gabe said she did not like going to visit her dad in the nursing home because it was hard seeing him there.  He had lots of tubes and things and it was scary.  Plus, nursing homes are filled with old people.  Adrian was only 36, and it just felt unfair.  So, Gabe did not want to go, but also felt guilty for feeling that way.

Gabe was at the nursing home when her dad died and even though it has been many years ago, she says, “It’s like it was yesterday.  You recall it so much.”  She got a bit teary when she talked about that and, to be honest with you, so did I.  Even though I did not know Adrian, knowing what he and his family went through still made me feel sad for them.  Losing a parent when you are a kid is hard. 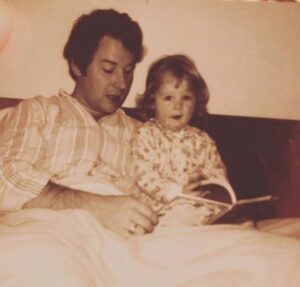 Gabe remembers her mum telling her that she did not need to go to school the next day, but Gabe wanted to go to school because she just wanted everything to go back to like it was before.  But when she went, “It felt like everyone was being weird to me.  They were being too nice.  I realised they all knew, and I didn’t want anyone to know.”

Gabe explained that after her dad died, she did not want any attention.  “When you are a kid, you don’t want to stand out or be different.  I almost felt ashamed that I had been through something like that.  Losing your parent shouldn’t be embarrassing, but that is how I felt.”

When Gabe first heard about Wombat’ Wish, she said she wished it had been around when she was a kid.  “Something like that would have been amazing!”  She explained, “I didn’t know anyone who had lost a parent.  No one talked about it.  You do not think anyone wants to hear how you feel about your dead dad.  So, I just kept going and felt if I did that long enough, it would not be real.  But grief catches up with you.”

When I interviewed Gabe, she had just received a special gift from her Auntie, some old letters that her Dad had written to his Mum when Gabe was just a little girl.  Gabe explained that these were important to her because, while she does have memories of her dad, “reading the letters confirmed that my memories of him were real.”  She said he had beautiful handwriting and she could imagine him “sitting there with a pen and paper, writing to his mum about each of us kids.”  She really smiled when she talked about that.  I did too.

Our interview was interrupted by someone who stopped by to pick up an order from her business, Animatica Workshop.  This brought us back to talking about sewing again.  Gabe explained that when she started sewing, her mum did not seem terribly eager to buy a bunch of new fabric.  “So, I had to use what she could find around the house.”

One of her earliest creations was a pair of shorts she wore to camp made from her baby sister’s “recycled nappies.”   She had used a fabric marker to adorn them with dainty mushrooms, flowers, and grass along the leg holes.  She says she was proud when a teacher asked a few questions about them, but looking back figures her teacher was thinking, “Oh, look at this poor bedraggled little fatherless girl wearing shorts made from her sister’s nappies.”  She had a bit of a laugh about that.  I did too.  I have to say, I am happy her sewing skills continued to improve and that she now buys special fabrics.  Otherwise, I might be made from old nappies, too!

After her dad’s death, Gabe starting using clothes from his closet to create things for herself.  One of her best creations was a skirt she made from a shirt he wore that was covered in a print of woman in cancan dresses.  The buttons went up the front of the skirt and she turned the sleeves into pockets.  She describes it as “50s Goth” and said it was one of her all-time favourites.  “I connected with him by remaking the things that he wore.”

Her passion and creativity grew and many years later, when she was asked about making a wombat mascot for Wombat’s Wish, she “jumped at the opportunity.  Sewing has always been an outlet for me.  I enjoyed making Freeman so much and love knowing that he can help kids find their way through their grief.”

And so that is how I came to be, Freeman, your loveable chubby wombat.  I think it is cool that I was named after such a great guy and I am glad Gabe shared her story with me and I was able to share it with you. 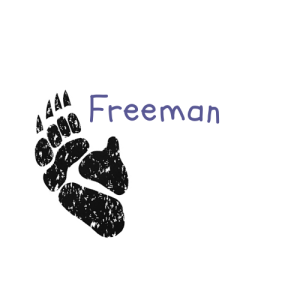